Antonio was born in Malaga, from the very beginning, his interest in art was evident. Any piece of paper that ended up in his hands was transformed into a colourful, expressive drawing. As a schoolboy he put all his emotions into his paintings and quickly exceeded expectations in art classes.

At seven years old, his family relocated to a village on the east coast of Malaga, and when he was ten his parents enrolled him in a private art school in Malaga where he studied until the age of twenty one. These eleven years of professional training developed his skills and prepared him for a future artistic career. During this period he regularly had commissions, painting landscapes, marine, nature, and still lifes – all with passion and great success.

During this period he studied and developed his own personal artistic style, characterised by a concise, colourful and positively expressed figurative art. At around the same time, positivity started to become the focal point of his work.

So far he has successfully exhibited his work in many different centres, including the Lyceo Frances in Malaga, the Nautical Club El Candado and the Cultural Centre for Contemporary Art.

At seventeen, after graduating from High School, he made a surprising choice, deciding to study Technical Industrial Engineering at Malaga University. His parents supported this decision, although they felt his future lay in art, which would prove to be correct as time passed.

After obtaining his degree he moved to Torremolinos, on the Costa del Sol and worked for eight years as an Industrial Engineer in several areas such as quality certification, metallic structures and environments, always trying to fit in his main interest, painting.

After this success at work he felt the need to branch out, so he joined forces with his former partner and current business partner to open Parthenon, which quickly became one of the most emblematic nightclubs in Southern Spain, an icon of nightlife situated in the heart of Torremolinos.

Despite these successes there still was something missing and deep inside he knew he had to enjoy what he loves best - he needed to dedicate all his time to his great passions: painting, his family and love life. Because of this, he has now given up engineering and is coming to live in London. He will run his business from there, as well as pursuing his artistic endeavours.

He feels that London is the place to be right now. London’s rain and grey skies combined with its diversity are a great inspiration to him - a canvas in which he can fill with colour and positivity that comes from within.

Antonio Pozo bases his artwork around human positivity and its reflective attitude towards life. Constructing distinctively colourful characters out of situations when he finds himself in some sort of special moment, his painting style is rather personal and unique, modern, though occasionally toned neoclassical, he expects the viewer to appreciate the outcome of his work and continue to enjoy it as it is observed in the same way he did when creating it.

The work resembles Post-impressionism era with the use of vivid colours capturing different themes and real life characters as well as Expressionism for its change of shape. The use of bright colours is merged beautifully as he places great emphasis on them, and that’s the positivity in life that he believes is worth fighting for.

His work is well crafted and distinct as well as defined and it is as if it was being performed under the new technologies of modern graphic design and three-dimensional work resulting in a modern, fresh and surreal overtones. His deformed characters with strong expression in the faces and disproportionate bodies are surrounded by intense colourful environment. Involving bright colours and making use of pure white, his work reflects the constant daily struggle to achieve inner peace.

Selected as one of the top artists by the Huffington Post at the Untitled Artists Fair in London 2014 : "Antonio Pozo, a painter from Malaga based in London, exhibited exquisitely crafted portraits. Strongly influenced by German Expressionism and Soft Cubism, his works dissects the human soul with great insight, skill and originality. The sitter starts a dialogue that it is constantly fresh and direct. A rising star to closely be watched"

All original paintings of Antonio Pozo are unique and exclusively identified by their holographic seal of authenticity found in the back of his paintings. 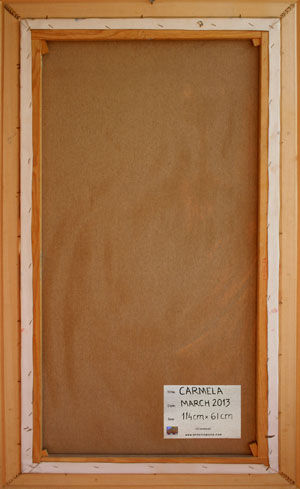 Holographic seal of authenticity found in the back of his paintings 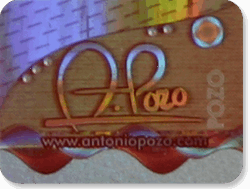 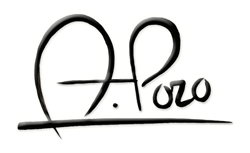